Hope For Paws celebrated its 11th anniversary by rescuing another adorable animal. Loreta Frahkonyte and JoAnn Wiltz, two of the rescue group’s volunteers, were notified that a dog had given birth to nine puppies. Upon hearing that, they set out to save the animal family.

When they arrived at the location, the temperature was high. The mother dog repeatedly attempted to move her puppies beneath the house that they were living in. For personal and hygienic reasons, though, the temporary caretakers continued bringing them outside.

The mother, who turned out to be a Chihuahua mix, and her puppies were placed in a mixing tub. The family ensured that there was sufficient padding. Even though the dog was guarding her puppies, she was remarkably submissive. Typically, dogs are quite protective of their young.

The rescuers also thanked the household that provided the stray dog with a temporary place to give birth to her pups. After placing the dogs in the car, the rescuers proceeded to the veterinarian as they often did after securing the dogs that they had helped.

The brave rescuers gave the mother the name Godiva. For her medical examination to proceed smoothly, they separated her from her puppies for a short time.

Godiva had trouble feeding her young for some time. It is difficult for a little dog to care for nine puppies all at once. However, with Loreta’s guidance, Godiva was able to succeed with this important task.

Since Godiva was covered in motor oil, a thorough cleansing and bath were required.

Godiva has a pack of gorgeous puppies ready for adoption five weeks following the rescue. The puppies’ names were derived from different types and brands of chocolates. 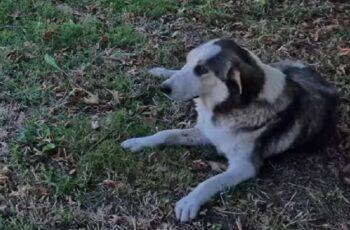 A homeless dog named Elsa spent significant time on the …

If you’re looking for some good vibes, TikTok is the …